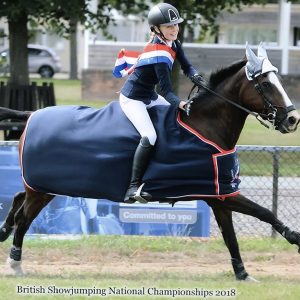 A fantastic introduction to the world of British Showjumping!

We will be running BS Club and schools qualifiers during 2020 on Friday evenings plus a couple of weekend dates. We have currently scheduled 6 dates and will add more if the interest is there.

Entries in advance via horsemonkey.com

The ‘Just for Schools’ League and Championship is run in conjunction with The Pony Club and British Riding Clubs and the qualifying period runs from the 1st July through to the 30th June each year.

Schools/Colleges can submit teams of three or four riders within a specific height category of 60cm, 70 cm, 80cm, 90cm, 1.00m and 1.10m at ‘Just for Schools’ competitions.

Each competition will generate points for the teams and individuals that go towards the national Schools League for each height. These leagues then provide the platform to qualify for the Championships and the League Winners Training Camp:

There is an annual League Winners Training Camp where winners of each team league and top 3 combinations of each individual league will qualify for the training camp funded by The Worshipful Saddlers Company.

The National Final at the British Showjumping National Championships at Stoneleigh Park in August where the top 8 teams and 10 individuals from each height league qualify, along with the winning team and top three individuals from the direct qualifiers that are ran across the country.

For a School/College team to join it is just £30 for the year per team for three or four members, these members can be interchanged throughout the year as long as the new combination are registered with within 7 days of the competition. Along with each team application form please submit an individual application form for each horse/rider as well.

If a School has individuals that want to compete they can and if they are members of either The Pony Club, British Riding Clubs or British Showjumping they do not need to pay another registration fee, if they are not a member of these then there is a £30 registration fee for the year for the horse/pony and rider combination.